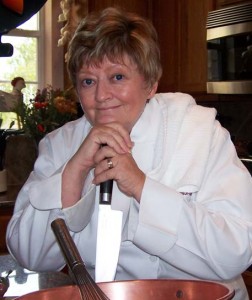 Terry Thompson-Anderson grew up in Houston in a typical suburban household, except for the fact that her mother was not much of a cook. So, when she married after pursuing a degree in English, she found herself as a new bride who, likewise, did not know how to cook. Saved from a life of culinary deprivation by a mother-in-law who was a fine southern cook from Macon, Georgia, Terry became fascinated by this new world of cooking.

After a move to Austin, Texas, she began to take avocational cooking classes at every cooking school that opened. A move to Lousiana made Terry realize her love of food, and she made the decision to go back to the halls of academia, only this time to attend culinary school.. She also had the privilege, along with five other women culinary professionals, to spend two weeks of intensive study with James Beard at the Stanford Court Hotel kitchens in San Francisco shortly before his death. She says it was an experience that could never be duplicated, and one that forever changed the way she looks at, purchases, tastes, and cooks food.

A nine-page feature in the December, 1983 issue of Bon Appetit magazine brought requests from across the country for consulting and her first book offer. Terry has written seven cookbooks, that first one, Cajun-Creole Cooking, was heralded as “the best Cajun-Creole cookbook on the market” by the Los Angeles Times (HP Books 1986 and 1984; Shearer Publishing, 2003); Eating Southern Style (HP Books 1988 and 1993); the award-winning Texas on the Plate (Shearer Publishing, 2003); and The Texas Hill Country – A Food and Wine Lover’s Paradise (Shearer Publishing, 2008), and Don Strange of Texas – His Life and Recipes (Shearer Publishing, 2009.) She also served as editor for The Cooking School Cookbook (Diamondhead Academy, 1988.) Her seventh book, Lone Star Eats, a compilation of recipes from legendary Texas cookbooks, which she edited, was released in October of 2011. She is currently writing a comprehensive book on the foods of Texas, for the University of Texas Press. Terry has also written for many local and national publications. She serves on the Advisory Board for Edible Austin magazine and also writes feature articles for that publication and a regular column on Texas wineries. She has appeared on numerous television and radio programs across the United States, including Fox and Friends in Times Square in New York City.

After owning her own restaurant in Bay St Louis, MS., a family tragedy brought Ms Thompson-Anderson back to Texas, where she accepted a position as Executive Chef with the Halliburton Corporation, in charge of food and beverage service for their executive lodges. In 2004, Terry moved to Fredericksburg, Texas, in the heart of the Texas Hill Country, to launch a line of food products, based on recipes from her book, Texas on the Plate. She is sought after as a culinary consultant/chef, cooking teacher, cooking demonstrator, and lecturer/panelist at food and wine and other events. She was a charter member of the International Association of Culinary Professionals, the Southern Foodways Alliance, and the prestigious Les Dames d’Escoffier International. She lives in Fredericksburg where she lovingly tends a flock of chickens, vegetable, herb, and chili gardens.