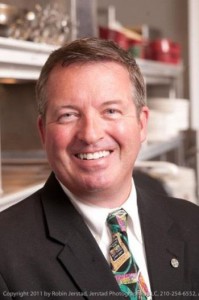 William Varney is the Founder and Former owner of Fredericksburg Herb Farm, he sold the company in 2007. Co-author of Herbs Growing & Using the Plants of Romance, Ironwood Press, Tucson, Arizona and Along The Garden Path, Favorite Recipes Press, Nashville, TN. He became interested in plants and gardening at the young age of eight, and later graduated with BS in Business and a Minor in Horticulture from Oklahoma Panhandle State University. After a one-year agriculture stint in Tasmania, Australia, Bill joined a large nursery in Houston, TX as a buyer for their landscape division.

In 1985, Bill moved to the quaint town of Fredericksburg, Texas and opened a herb shop. Quickly, the shop grew at a jack-in-the-beanstalk pace, and in 1991 he moved the fledgling business to the old abandoned Lehne-Itz Homestead. It is there that he built The Fredericksburg Herb Farm – originally four acres of gardens and shops, a day spa, restaurant, bed & breakfast and herbal manufacturing warehouse. That same year, the Herb Farm’s Edible Flowers Herb Vinegar received the Outstanding Condiment Award at The International Fancy Food show in New York City, fueling interest in the fledgling company, and tripling sales of their herbal products. He is self-taught in cooking with herbs, and has cooked at The James Beard House in NYC, and has appeared on The Food Network, and been featured in many publications around the U.S. for his creative concept of herbs, cooking, and gardening. He has always had a certain flourishing touch to bring things to life. Be it in the form of a business, garden, or meal Bill knows how to bring the wonderment of nature into the human capacity.

He is available for speaking engagements and owns URBANherbal in Fredericksburg with his son, Roy.

Bill is ever mindful that individual’s lives can be enriched through the experience of herbs: in their gardens, kitchens, baths, medicine chests, homes, and places of worship. He has always been inspired by Faith, Hope and Love through his family, friends and church.